Hugh Archer still lives in the geodesic dome he helped build on his farm in Anderson County in the 1970’s. He still hasn’t cut the 130-year-old tract of towering white oaks. But he long ago gave up the cows, sheep and goats that comprised a “failed farmer” venture. The Australian Shepherd puppies were, however, a money-maker as is the mixed hardwood forest on his farm - if the euonymus and bush honeysuckle don’t overtake it. Recently retired from the Kentucky Natural Lands Trust, Archer says he is a certified tree farmer. Just gotta get around to the invasives removal.

Hugh still serves on an average of five to six boards at any one time where he tries to be a lateral facilitator among a range of natural resource conservation NGOs. He has been a long-time board director for KWOA. He calculates that during his long career he has overseen more than 300 land projects. This includes more than 50,000 acres purchased for KNLT, mostly on Pine Mountain. He has worked on many of the projects featured in Tom Barnes’ book Kentucky’s Last Great Places (The University of Kentucky Press, 2002). As Hugh expresses it, “cockroaches don’t invent corporations.”

At the time of his recent retirement from KNLT after 25 years as a founder, former director and staff member, the Trust has twenty active projects in the pipeline. (See the tribute to Hugh, “Thinking Like a Planet” on the KNLT website:  https://knlt.org/blog/thinking-like-a-planet/. Hugh was recently awarded the Forest Advocate Award by the Old Growth Forest Network. He notes how thirty years ago the idea of forest symbioses among trees, fungi, insects, etc. was too often considered a spiritual concept. New scientific findings are proving that it’s a whole system. (See the December 2, 2020 article, “The Social Life of Forests” in The New York Times Magazine.)

KNLT recently protected an additional 1,368 acres on Pine Mountain near Cumberland, Kentucky, establishing the Warbler Ridge Preserve. The Trust is continuing to work with Greg Kuhns, a KWOA director-at-large and former officer, on a training app for landowners. Archer and Kuhns have also been instrumental in Bernheim Forest and Fort Knox corridors.

Archer sees KWOA as an extremely necessary liaison between government and private sectors. He is concerned about insufficient future involvement by younger generations, fracturing of the remaining forest blocks by so many competing interests and views of best land use. But in the end he believes water is worth more than coal, and economics of “highest and best use” may work for us in the future.

Still in the game, Hugh plans to be involved in the Eastern Wildways Network which provides a vision of a migratory corridor from Florida to Nova Scotia. He will promote a new project funded by State Heritage funds matched to Land and Water Conservation Funds which were appropriated last year by Congress. He will also work for the Southern Conservation Partnership to serve as a fiduciary for multi-state projects.

Back on the farm Hugh relaxes with his dogs, a wood burning stove and some serious culinary endeavors. He says keeping up with ever-changing internet and other technologies is too much effort although he likes the ignition chip in his new Stihl chainsaw.
​
And yes, he has provided for the future of his farm. Its 100 acres of forest and 40 acres of fields are uniquely located on a watershed break between the Salt and Kentucky Rivers. He has left it to KNLT. 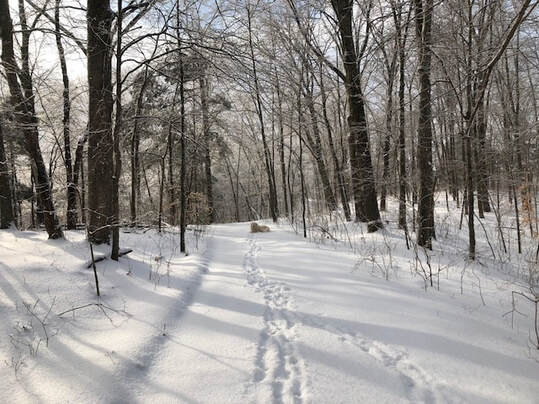